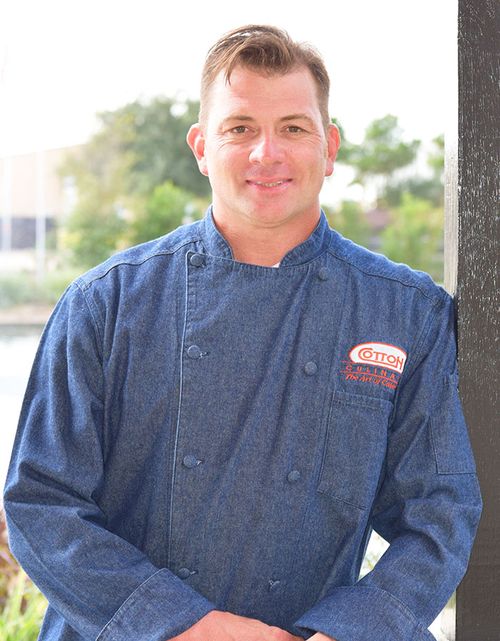 Chef Schindler spent many years running his own successful catering business prior to joining Cotton Culinary. The youngest of six kids from Columbus, Texas, growing up he always enjoyed family-style meals and recalls his granny dragging him into the kitchen to help her bake bread and kolaches. After graduating from Western Culinary Institute in Portland and working in several major cities, the comforts, securities and familiarities of small town living drew him back to his roots. A self-described “maverick” in the culinary world , in 1996, Chef Schindler pursued his entrepreneurial passion and began selling breakfast tacos from the food truck he could afford - a single cooler on wheels. As a result of his unwavering energy and passion for people and food, his business grew and prospered., Chef Schindler would do it all - cooking, cleaning, serving; whatever it took to get the job done for his clients. He eventually built up an impressive food truck fleet, allowing the flexibility to cater a variety of events, large to small, near and far. Now, as Executive Chef with Cotton Culinary, Chef Schindler has the support of a full team of chefs and catering staff, allowing him to show off his creativity while focusing on menu planning and catering services for multiple business lines.